In English, tones are used to indicate whether a sentence is a statement or a question. Changing the tone in English will change the mood or the emphasis of the sentence, but not the meaning of the sentence. Chinese sentences apply the same rules.

Chinese is a tonal language; each Chinese character has a tone. Each pinyin syllable in Chinese can have 5 possible ways to pronounce by varying the tone (pitch). There are four tones and neutral tone(toneless)in Mandarin Chinese. One syllable. pronounced in different tones will usually mean different things. Comparing with English, which only has rising tone and falling tone, Chinese has four tones including flat tone, rising tone, falling-rising tone and falling tone. As shown in the following table: 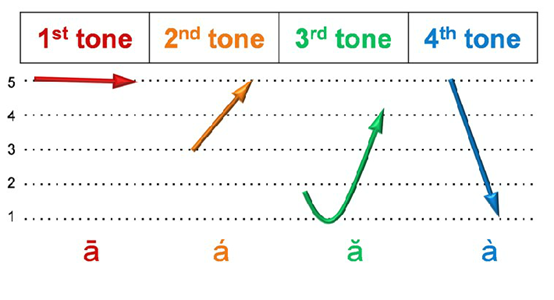 The 1st tone, flat tone with highest pitch, marked as ā or a1.

The 2nd tone, rising tone, the pitch changes from the middle one to the highest , marked as á or a2.

The 4th tone, falling tone, the pitch changes from the highest one to the lowest , marked as àor a4.

For neutral tone also called toneless tone (called “light sound” in Chinese). No marking is put above any vowel, like "a".

In Chinese it is always very important to pronounce characters and words with correct tone. If not, it is difficult to understand each other. For example: the English words “book” and “tree”, the spelling of their pinyin is same but with different tone like” shū” and “shù”, then the words’ meaning are totally different.