Nuwa, the goddess of creation in ancient Chinese mythology. It is also known as wa Huang and NV Yin. In historical records, Nu Wa's family is the forerunner of the Chinese nation's humanities and the God who blesses the country.

It is said that Nu Wa created people, changing 70 times in a day, kneading earth to create people in imitation of herself with yellow mud, creating human society and establishing marriage system; Because of the collapse of the world, the colored stones were melted to fill the sky, and the Turtle was cut enough to establish the quadrupole, leaving the myth and legend of Nuwa mending the sky. 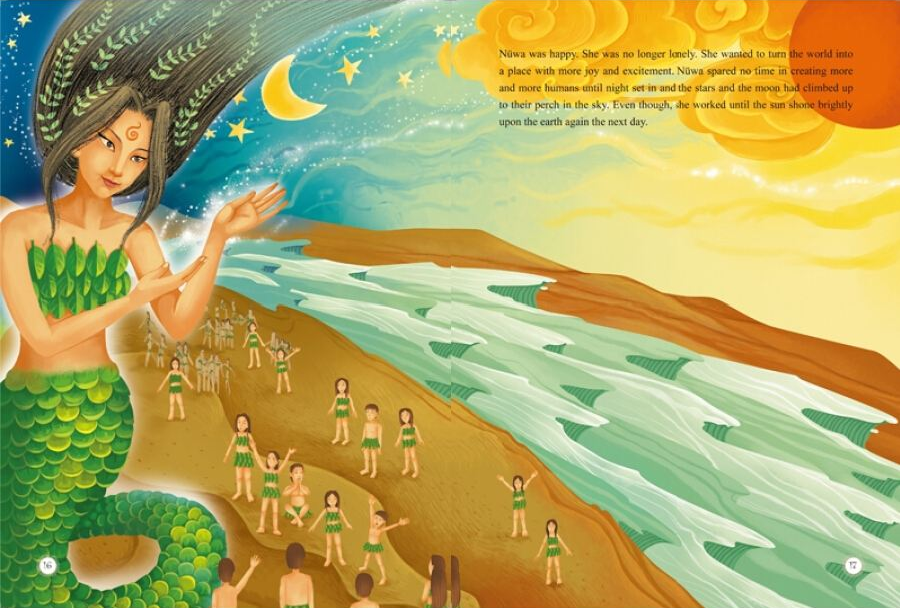 Nuwa is not only a hero who mends the sky and saves the world and a goddess who kneads the earth to create people, but also a natural God who creates all things. She has vast powers to transform all things and can create at least 70 things every day. She created things in the world, so she is called the mother of the earth. She is the creator God and primordial Mother God widely and long worshipped by the people.

It is said that when human beings multiplied, suddenly the God of water Gonggong and the God of fire zhurong fought. They fought from heaven to earth and got restless. As a result, zhurong won, but the defeated Gonggong refused to accept it. In a rage, he bumped his head into Buzhou mountain. Buzhou mountain collapsed, the pillar supporting heaven and earth broke, the sky fell half way, there was a big hole, the ground also fell into big cracks, the mountains and forests burned a fire, the flood gushed out from under the ground, and dragons, snakes and beasts came out to devour the people. Mankind is facing an unprecedented catastrophe.

Nu Wa felt extremely painful when she witnessed such a strange disaster to mankind, so she decided to mend the sky to end the disaster. She chose all kinds of colored stones and set up a fire to melt them into slurry.

With this slurry, she filled the incomplete hole in the sky. Then she cut off the four feet of a big turtle and used it as four pillars to support half of the collapsed sky. Nuwa also captured and killed the black dragon who was harming the people and stopped the arrogance of the dragon and snake. Finally, in order to stop the flood from overflowing, Nuwa also collected a large number of reeds, burned them into ash and buried them in the flood spreading everywhere.

After Nu Wa's painstaking rectification, the sky was finally filled, the ground was filled, the water stopped, the dragons, snakes and beasts were missing, and the people lived a happy life again. But after all, this great disaster has left traces. Since then, the sky still tilts to the northwest, so the sun, moon and stars naturally return to the west, and because the earth tilts to the southeast, all rivers converge there.